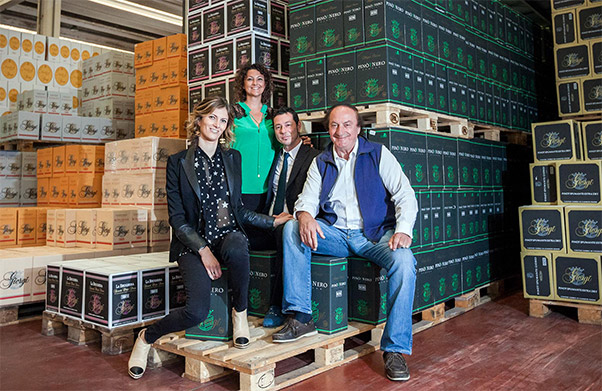 The origins of Cantine Giorgi date back to 1875. The first generation of the family Giorgi wine produced wine for the families of the neighboring countries, according to the customs of the time. Unlike others, however, already with great ambition, he pushed outside its borders. Giorgi I have always strongly focused on the entire production chain, from grape to bottle, throwing from the beginning the foundation to realize their grand project of creating a winery paramount. This project has become a reality as early as 1970, when the brothers Gianfranco and Anthony, built a second cellar, modern and technologically advanced in Canneto Pavese. Winemaker and one man marketing the other, managed to build an image of the company and the quality of the wines produced remained indelible in time.

With the construction of the third cellar, in Camponoce, Giorgi in the 80 finally it reaches the national consecration, with a sales network of 80 representatives and with the presence in the best restaurants and wine bars in the best national.

Today Giorgi Wines exports to 59 countries around the world, has more than 160 agents in Italy, has won the most important national and international awards (Tre Bicchieri Gambero Rosso and Five Bunches sommelier). Proudly Giorgi is the Oltrepò Pavese in Italy and around the world.

All this was possible thanks largely to a foundation always present in its history: the family at the center of the enterprise. Antonio, the father, with his long experience coordinating and overseeing all business operations supported by their children: Fabiano heads the company dealing with sales and marketing and coordinating winemakers from production to bottling. Eleonora responsible for the administration. Ileana is in charge of foreign relations.

Finally the last generation has already joined the company with the small Ginevra that has lent its name to a new creation Giorgi.